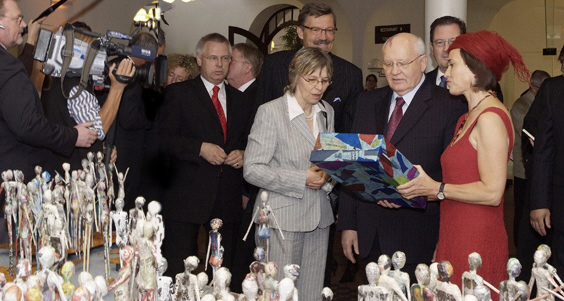 Primary subject of the „Global Citizen Project“ is globalisation, most of all the effects of various aspects of this new rapid development. Globalisation substantially changes our lives. It’s already obvious that cultural diversity grown over milleniums will gradually merge with an almost uniform global culture.

Through this project the artist attempts to transform global society in its cultural variety by means of art. Thus the artist has formed 200 small lean figures (30cm) from material derived from national newspapers from all over the world, each figure representing one nation.

This project is the result of Xenia Marita's dealing with cultural and political topics in the course of the development of globalisation during the the last years.

The artist's work will mainly focus on

A book on the subject has also been published. The book contains numerous pictures of single figures each representing one nation as well as groups such as continents and political organisations e.g. OSCE, ASEAN. The accompanying text (English and German) focusses on the main topic globalisation and its various aspects.