Art Book on the Subject 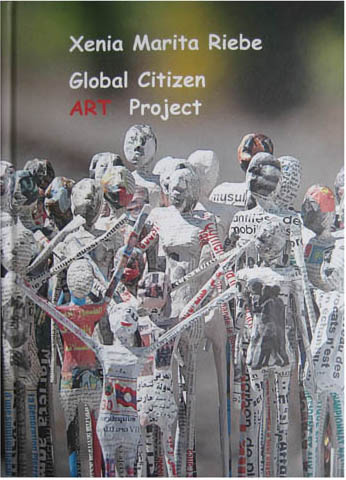 Along with Michail Gorbachev's visit to Moenchengladbach where he was present at the opening of the Global Citizen exhibition on 28 June 2007 the book Global Citizen ART Project was published.

Global Citizen is an art project dealing with various aspects of globalisation. The artist has created figures from newspapers she had obtained from almost every country in the world. She wishes to show that nations run the risk to lose their cultural diversity if their languages and scripts become more and more uniform. Photos, scripts and language are clearly visible on these 200 figures - the project thus also functioning as a snapshot of the status quo at the beginning of this age of globalisation.

The book contains numerous pictures of single figures each representing one nation as well as groups such as continents and political organisations e.g. OSCE, ASEAN. The accompanying text (English and German) focusses on the main topic globalisation and its various aspects. Global diversity, economic and social issues are discussed taking the example of nutrition, children and "Global Village"
There are also copies of documents such as letters and mails received from all kind of institutions e.g. government agencies, embassies, public authorities, universities, editorial staff, hotels from all over the world.
These are artfully placed corresponding to the figures thus contributing to the realisation of this topic.